Joy Bernard is a writer and journalist. She previously directed the news desk at the English edition of Israel’s leading newspaper, Haaretz. Joy’s writing in English and in Hebrew about visual arts, culture and Israeli welfare issues is featured regularly in publications such as Haaretz, The Jerusalem Post, Times of Israel, TimeOut and The Art Source Magazine. Joy is also an art guide. She provides private art tours and heads a series of weekly public tours of Tel Aviv-Jaffa’s contemporary art scene for Oh So Arty.

JB: These are my five picks of artworks by local Israeli artists that are featured on Art Source. They are starkly different from one another, yet all tell the story of a home or its lack thereof and a memory of belonging. 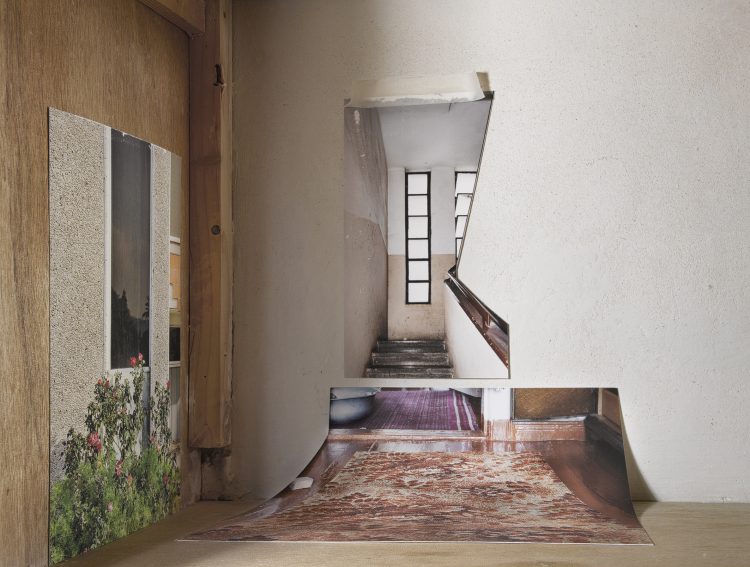 Vera Vladimirsky, The Last Apartment / Where Are You From Originally, 2014

My first pick is an artwork by Ukraine-born, Tel Aviv-based photographer Vera Vladimirsky. The choice is not coincidental at all – in fact, this very same photograph hangs in my home, so it’s safe to say that I’m a little biased. This assemblage of photographs Vladimirsky put together depicts various apartments she has lived in over the years since she immigrated to Israel with her family; it’s part of a series, which bears the same name as the picture below.

Those who know me well are aware of my nomadic nature. I move around often, and changed apartments five times over the course of the past five years. Part of it stems from a sense of disquiet that I must have inherited from a lineage of wandering, restless Jews; the other reason for my constant desire to up and leave is an unsated thirst for adventure and discovery.

That’s why Vladimirsky’s pictures, which she took only after leaving each apartment, pluck at my heartstrings. I often ask myself, in day-to-day life as well as in writing, where exactly I might find what others very naturally call home. Is it in Tel Aviv? In New York? With my family or far away from them? With lovers and friends, or within me?

The images Vladimirsky has created offer a poignant yet fragmented answer to this complicated question. It seems all the more relevant during these days, when many of us are confined to our homes because of the coronavirus pandemic. 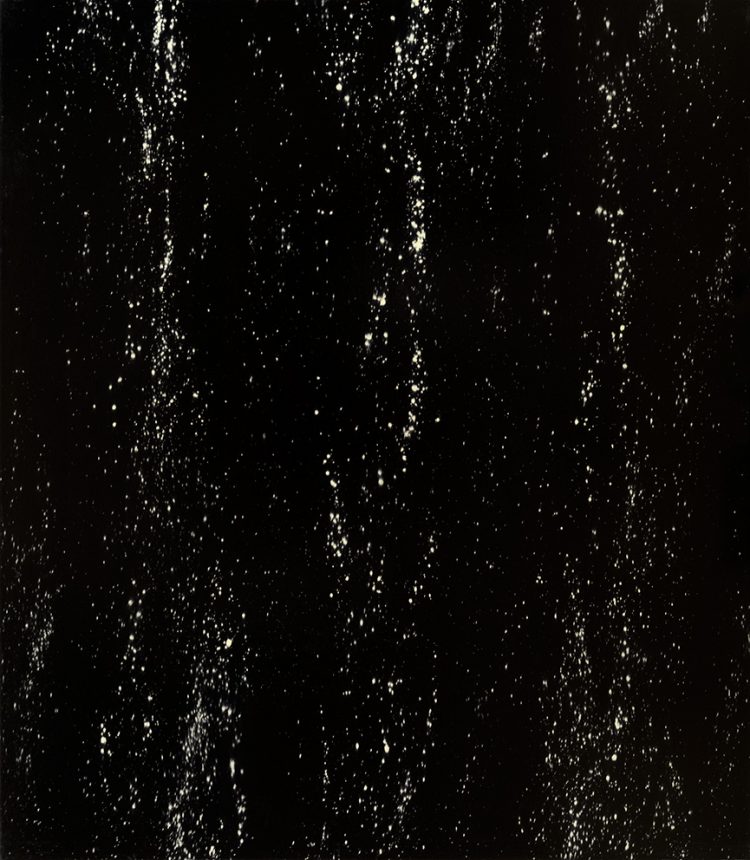 I have written before about this incredible painting by Israeli artist Mosh Kashi, and even got to see it firsthand in his studio, where I visited for an interview you can read here on the Art Source Magazine. Kashi, who is known for his nature-inspired paintings, created a monumental artwork here that is at once characterized by his keen sense of detail but also distinctly removed from his trademark style. Up close, the painting looks like a fairly simple experimentation with the effect the painter’s hand gestures have on the buildup of a solid, monochromatic scene. Take a step back and you will suddenly find yourself facing a trail of dying lights shooting through an endless night sky.

For me it evokes memories of star-gazing on Tel Aviv’s rooftops during clear, summer nights. It gives the viewer a humbling sense of proportion, reminding us of our awe and impotence in the face of the beautiful but brutally indifferent nature. 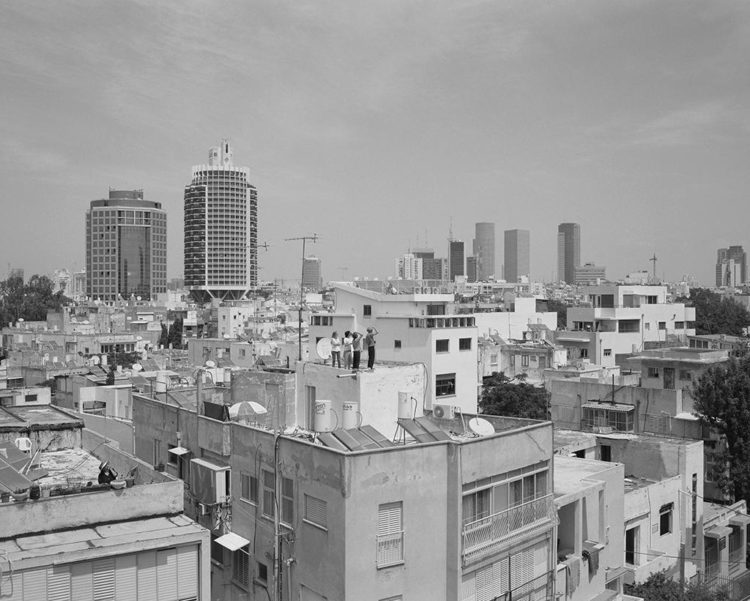 Some of the most meaningful relationships we form in life, especially if we experience immigration, are not the ones we forge with people but rather with cities. If you have visited Tel Aviv or lived in it for a significant period of your life, like I have, you will likely develop an exhilarating and often heartbreaking love affair with the White City.

In one photograph, veteran Israeli photographer Sharon Ya’ari managed to capture the many contradictions that make the city that never sleeps the charming home I always dream of returning to whenever I venture far. The hideous, Americanized wave of construction that has swept over the metropolis over the past two decades is evident in the vulgar skyscrapers that appear to be violently jutting out of the frame. But hints of trees, perched between the buildings, will remind a viewer familiar with the Tel Avivian landscape of its picturesque, greenery-dotted boulevards and parks.

In a conversation we once had (which you can read here), Ya’ari once told me that he considers himself a silent observer who bears witness to the transformations his surroundings go through. This quality is his strength as an artist: Like the group of people standing together and pointing at the skyline, filmed from the back, Ya’ari is a removed narrator. At once a resident of the city and a stranger documenting it, through his lense he tells the story of the ever-changing Tel Aviv. 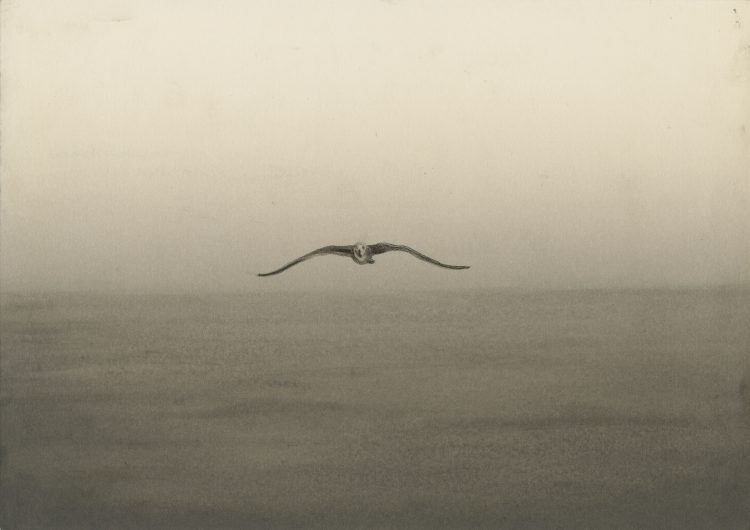 A seemingly bleak-looking drawing, this work by Israeli painter Lihi Turjeman appears to be a complete departure from the monumental visual language that is synonymous with her craft for those who know it. Created by hand with graphite and charcoal on paper, it doesn’t resemble any other artworks by Turjeman, whose large and compelling paintings usually depict amorphous forms.

But the close attention to each detail and the visceral physicality that guide this frame are very much reminders of the artist’s tradition. Both the name of this oeuvre and its subjects continue a creative monologue that Turjeman sounds through her work on themes such as immigration, development and identity. A seraphic-looking eagle flies over an endless ocean, trying to return to a lost homeland; the observer’s eye is at the winged creature’s level, sparking a feeling of identification.

The biblical story of the Israelites’ arduous road to Cnaan, their promised, God-given land, is perhaps analogous to the lonely path an artist must tread down. Looking at it, I can’t help but think about the complex relationship and yearning all travelers develop toward the place they come from. 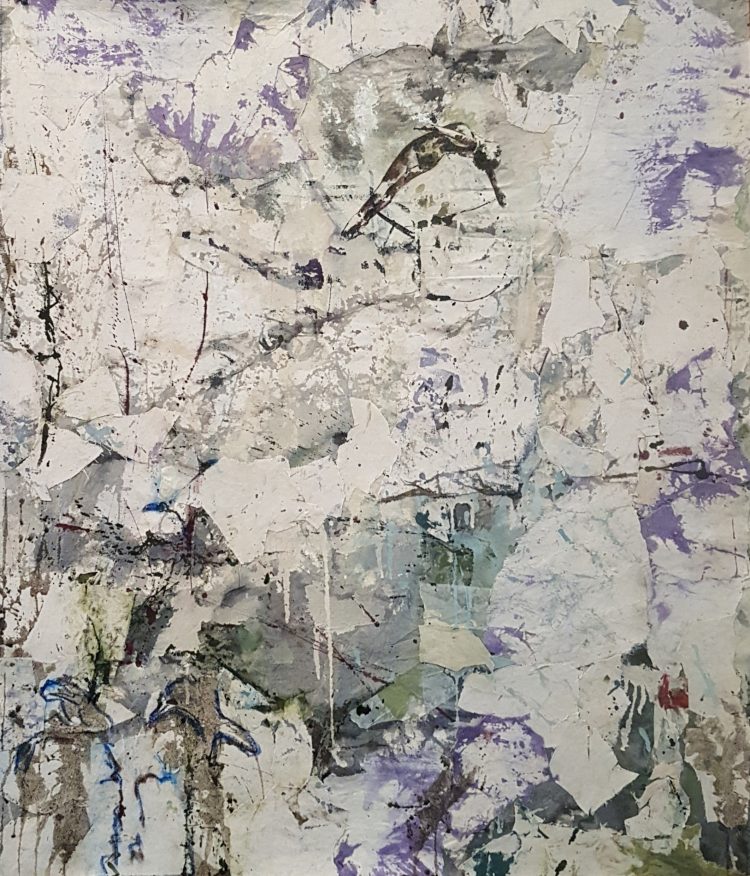 In the fast-paced world we live in, our senses are constantly assailed by countless stimuli and distractions. That’s why I enjoy Orly Maiberg’s paintings so much: They are intricate and multi-layered, forcing one to really stop, relax and delve into their rich folds of meaning.

Maiberg splashes gentle colors onto her canvas, transforming it into a soft, smooth ocean. She then surprises by torturing it, tearing it and exposing its many surfaces. The visual result is a painting within a painting, a multi-dimensional environment that beckons the onlooker to step inside. Hidden within the folds of Maiberg’s paintings are faceless people in transit. In this work she introduces a leaper.

Her miniature diver is a nod to the history of art (the image of Yves Klein’s iconic Leap Into the Void photograph comes to mind) but it is also an invitation to the diver in each and every one of us to take a leap of faith. If we summon our courage and jump in, Maiberg seems to suggest, we might discover a wonderful view.

Get to Know: Michael Liani

Get to Know: Anna Mirkin