Nitzan Mintz is a visual artist and poet based in Tel Aviv. Her work is created both in the public sphere, outdoors and in her south Tel Aviv studio, which she shares with Dede. In her process she integrates her textual work with the material that contains it and its physical, actual location in the street. Her poems combine the personal with the political; they are written out of an internal urge to verbalize mental processes which respond to the outside world. The locations she selects for her pieces in the urban sphere charges them with social and political meanings.

You Will Not Sleep

Mintz tells us that the first version of this piece was created as a protest banner, in black and white on simple construction paper. The text is a reference to the biblical ten commandments, an eleventh commandment of sorts.
The simple wording is open to interpretation, but in its original context Mintz intended it both for the leader of the country, and for the common citizen at the same time.
She later reworked that banner into a more intricate artwork, including materials like cement, paint and plaster, which she layered on top of each other and scraped off to create various shades and textures. 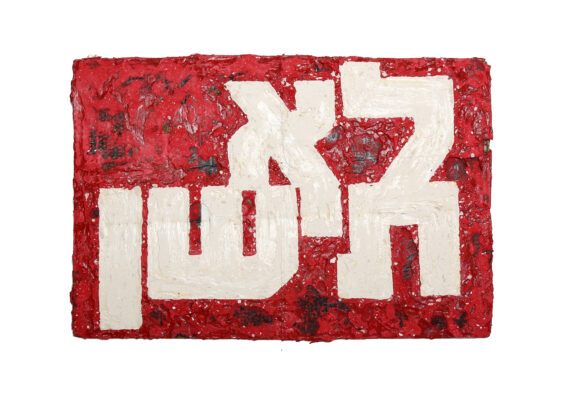 When Mintz originally created this unique piece it was intended for an exhibition marking Israel’s 70th year. She created an etching using the color palette of the Israeli flag, and inserted a subversive text into the visual. The exhibition ended up getting canceled and Mintz was left with the etching. She then started reworking it into a one of a kind piece, combining plaster, cement and more, while maintaining the original outlines, and using the newly formed textures to highlight the letters. Mintz says the final result is an echo of the original print. To us, its message echoes strongly in Israel’s political reality.

The portal grows smaller
And doors close in my face.
My name is not Alice
And this is not a wonderland.