Miriam Cabessa’s paintings bear the traces of direct encounters between her body and her materials of choice. Cabessa has eschewed the use of paint brushes since her time at the Midrasha College of Art in the early 1990’s, where she created works on photographic paper, kissing the paper fervently and experimenting in with the use of urine and heat from an electric iron to leave an imprint on the paper’s surface. Ever since then, she has expanded her vocabulary of painting, primarily using her hands and fingers and incorporating combs, irons, squeegees, glasses, rags and sponges into her painting process.

The Moroccan-born artist moved to Israel with her family as a child. The family settled in Tiberias in northern Israel and her entrepreneur mother opened a sewing school and managed a Maskit shop, selling and producing decorative arts, ethnic embroidery textiles, clothing and jewelry. Her father, a trumpet player, was an avid fan of Picasso and used to create replicas of his paintings. Cabessa and her elder sister were tutored by a Tiberian painter. She describes her childhood home as “an artistic house with a special cultural mix of Mediterranean music, American jazz and Arabic films”.

After her parents separated, Cabessa moved with her mother to Germany. A year later, she returned to Israel by herself at the tender age of 13, to a Kibbutz in the Jordan valley, Sha’ar HaGolan. Cabessa recollects: “I grew up in the Kibbutz alone, without my parents, and I adopted people who I cherished to form a self chosen family.” She decided to become an artist early on in life: “When I was six years old, I made a vow to myself that I would become a painter. It seemed evident to me that painting came hand in hand with discipline and daily practice, and from the age of 6 to the age of 24 I never missed one day of painting,” says Cabessa. 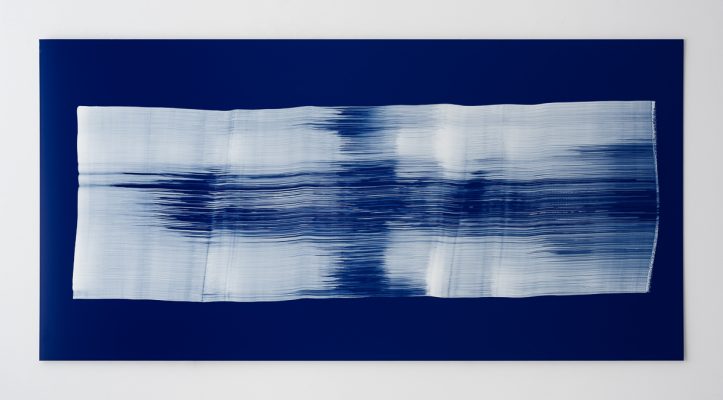 While painting incessantly, Cabessa practiced martial arts, obtaining a brown belt in Karate. She also tamed Arabian horses and was an equine midwife, assisting mares to give birth. “I used to train horses in the unique discipline of Dressage, challenging them to perform predetermined dance-like movements. The act almost defies gravity – causing the massive steeds to nearly glide,” Cabessa notes. In her paintings, she recreates the same sense of wonder, using her hands and taming the humblest domestic objects to produce miraculous choreographies on the yielding surface of a canvas, masonite, paper or aluminium sheet.

At the age of 21, Cabessa moved to Tel Aviv and studied at the Kalisher College of Art and at the Midrasha College of Art. A mere two years after completing her studies, she exhibited a solo show at Dvir Gallery, Tel Aviv. In 1996 she was the recipient of the Nathan Gottesdiener Foundation Israeli Art Prize and presented an exhibition at the Tel Aviv Museum of Art. In 1997 she represented Israel at the Venice Biennale and in 2000 she moved to New York City. She currently divides her time between Israel and the U.S, maintaining two studios, located in south Tel Aviv and in Williamsburg, Brooklyn.

In 2009, the artist began to generously share her painting process with the viewers in the form of live performances. “I noticed that the audience becomes emotionally attached to the painted image, wincing every time it is erased and rubbed away. While conjuring an image and removing it over and over again, the technique brings to mind Japanese zen gardens – creating intricate patterns in the sand with a rake and then erasing them altogether,” says Cabessa. The gestural marks and ghostly layers of paint gradually compose the palimpsest quality of her performative paintings.