I was running a little late for my “blind date” with Jossef Krispel at a local cafe. He sent me precise details on how to find him: “Blue shirt with a yellow bear on it. Outside on the porch”. Spotted!

Krispel is a sincere guy, gazing directly into my eyes I quickly felt at ease in his company and we started chatting like two old friends.

The conversation turned to the subject of israeli culture, or more so, the absence of cultural roots within the israeli zeitgeist. It’s an intense piece of land where people are often nerve-wracked, situations are explosive, and the weather is extreme. Although it is a difficult reality to endure, Krispel admits it’s probably the only place in which he feels comfortable enough to create, and, in spite of several havens across the globe, he could not imagine living anywhere else. Something in the israeli entropy allows him to dream, execute, and express himself best.

Yet, the inspiration for the leitmotif in his works is not local, but rather rooted in Greek Mythology, Late Baroque and European culture. When I inquired about this duality he responded, “there are many water sources out there from which one can quench their thirst”. And so, he figuratively turns his back to israel, seeking inspiration in other cultures, only to return and create his art here.

Our discussion trails to the role of the artist and the meaning of art. “I see the artist as a performer who keeps changing costumes, a magician that keeps pulling tricks out of their sleeve” says Krispel. Each artwork serves as a mask that allows the artist to expose himself, or an aspect of his being, to the light.

To Krispel, passion and creation are exclusively intertwined and the latter cannot exist without the former. “Creating a piece of art is a process that involves all senses”, he says, “I create art that awakens mine, using it to represent certain characteristics I yearn for.” He perceives his works as still objects that capture a critical moment in time. Pregnant with emotion, they create an intangible movement tantalizing their viewers’ faculties. According to this philosophy, every artwork represents a climax inevitably followed by a certain death. “It’s a celebration of effervescence, like Eros, the life instinct, and Thanatos, the death instinct – each counterpart is represented in the life cycle of every artwork”. 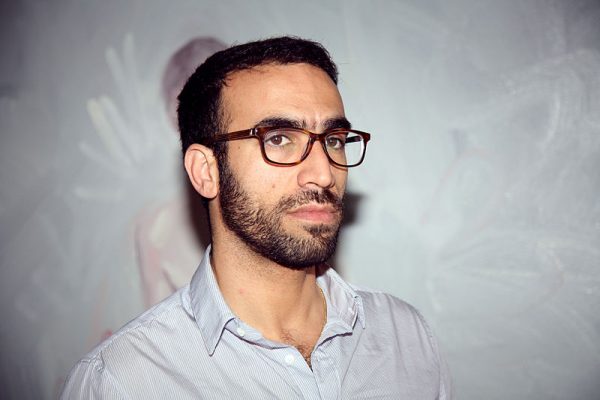 Another paramount element in Krispel’s work is color. From his 1999 duo-tone “Early Papers” depicting human figures in everyday situations on encyclopedia pages; through his 2007 “Stories from The Bible” re-framing famous biblical scenes with unique color application technique; to his later series of vibrant patterns “Middle/East” – color has always been an instrument for expressing sexuality.

When contemplating on his own journey he believes it is intriguing to examine an artist’s path, which will naturally have better works than others, and does not take himself too seriously. “The beauty in art is that it can be spectacular and it can be terrible, but at the end of the day, it is only art.”