Israeli photographer Tal Shochat is on a perpetual quest. What is she looking for? It depends. At times she finds herself driving aimlessly throughout the country, on the lookout for the perfect tree to capture through her lens. On other occasions, she launches an investigation to trace the face of a long-forgotten woman she met in the past and decided she must document. 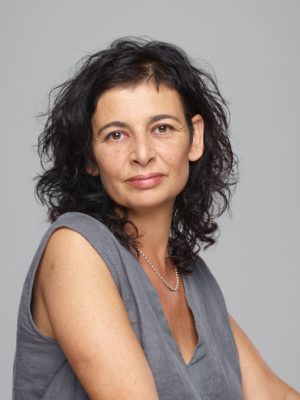 The subjects that catch her fancy vary, but one deep desire guides the artist at every turn – a wish to charge the banality of life with meaning and excitement by zooming in on the mundane until it is rendered unique by her gaze.

This impassioned restlessness is translated into large and riveting images of alternative realities Shochat dreams up, plans meticulously for years and then creates in chosen locations or in her studio. In the enchanted worlds she designs one can find beautiful, naked and utterly sad-looking women reclining in colorful, remote rooms; her elderly, bare-chested mother pictured in black and white and looking fiercely straight at the camera; large trees in bloom form serene but dystopian scenes.

The process she embarks on each time to craft these universes is arduous, the artist explains. “I work very slowly, every work is something I see after I dreamed about it for years and then it finally happens. There is always a discrepancy between what I imagine and what is created, often it’s not fun. Only after years can I see my own works as they are.”

While photography has been her sole medium of work for decades, Shochat says that she doesn’t identify as a photographer in the classical sense of the word. “When people ask me what I do, it’s very hard for me to say that I’m a photographer because I have no love for photography. I have no urge to capture reality or one moment in time. My attitude toward special moments or journeys is that the camera creates a distance. I think that photography is actually not being in the moment,” she admits.

So why did she turn to the camera instead of the canvas? “I always miss out on the decisive moments in reality, so I have to build them afterwards,” she explains with a laugh.

Some of Shochat’s most poignant works are photographs she took of her own parents. A video installation from 2017, titled “Other Days,” shows family members and other people marching through a transit camp that was populated by immigrants who came to Israel from Arab countries in the state’s early days.

Other portraits, such as a photograph named “License to Survive,” show Shochat’s father in his underwear, standing in a majestic pose and clutching a rooster in his hands while pretty, young women clothed in 1950s-style pin up garb flank him on both sides. Shochat says that the original idea to have her parents pose for the camera came from her, but they surprised her with the enthusiasm with which they completely immersed themselves in the shoots. 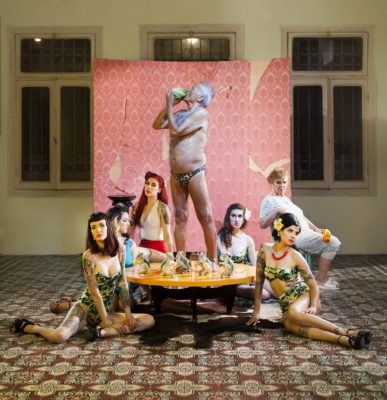 “To understand that my parents are ageing is hard. My need to document them increases,” she says. But the attempt to immortalize her loved ones and tell their stories in pictures is first and foremost commentary on the human condition, the artist believes. “My father acts out his alter ego in my pictures. I’m really interested in those extremes: How people perceive themselves, how we all feel that we are this untold legend. You carry this inner self, and the disparity is enormous because day to day life is gray and boring and you’re not at all seen. The photographs are about that – how does this terrible discrepancy happen?”

Trees are more interesting than people

When she isn’t snapping unusual shots of her family, Shochat chases after trees. Her fascination with them began as a conceptual experiment, she says. She thought about the most basic drawing that children usually make: A house and a tree. “The first tree I ever photographed came from this conceptual search after a very banal image that I wanted to shed light on from a different angle. You could say: ‘What’s so interesting about an olive tree?’ But it looks different wherever you see it – be it in nature or in my studio.”

Whether they stand isolated in fields situated in Arab villages or pop out against dramatic tapestries Shochat makes from plywood with the help of stage designers, each tree “has a story. It’s a story about the land, the people who live there, crop owners. That story is a portrait of a time and a place.” 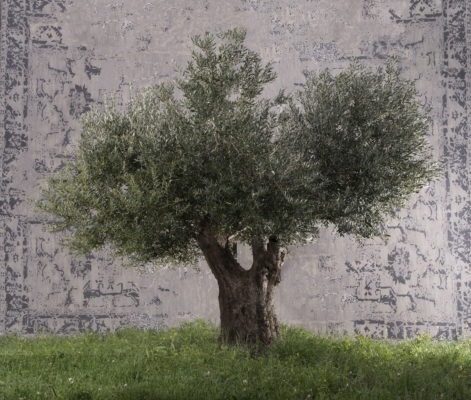 Here, too, Shochat’s father features again. Ruminating on how she first developed her keen interest in nature, the photographer recalls that her father was a forest ranger in her youth. Appearing in most of her recent series, the trees represent a visual investigation of themes such as ageing, fertility, growth, changes and even the Israeli-Palestinian conflict.

After searching for “the right tree” and marking it, Shochat returns with her team to the location, where they craft the sets. The artist says she prefers to build those alternative surroundings instead of taking a simple nature shot, because “I feel that the fabrication of realities actually creates a reality that is much more profound.”

“Besides,” Shochat jokes, “trees are much more interesting than people. They also don’t move or talk, you know how fun it is to take their picture? It’s an exercise in observation.”