In one of his most celebrated poems, titled “The Love Song of J. Alfred Prufrock,” American-British poet and writer T.S. Eliot had written the following poignant lines about an individual’s attempt to countenance the world beyond him: “There will be time, there will be time / To prepare a face to meet the faces that you meet.”

Eliot’s words seem to be the most adequate literary analogy for a practice that has been central to the work of Anisa Ashkar for over two decades: Painting phrases in intricate calligraphy on her face on a daily basis. Ashkar, a multidisciplinary artist who works in painting, installation, performance and photography, has made this habit a consistent ritual through which she reminds herself of the mental and creative values that steer her artistic and personal journey.

Ashkar says that she rises an hour after dawn each day, and carries out this action almost ceremoniously in order to give shape and presence to the thoughts and issues that occupy her mind. “I learned calligraphy in Arabic, Hebrew and English in my childhood. I began studying this when I was nine years old,” she recalls. “The meaning of the word ‘calligraphy’ is literally the art of handwriting. This is an act of writing that calls to attention the issue of form.” 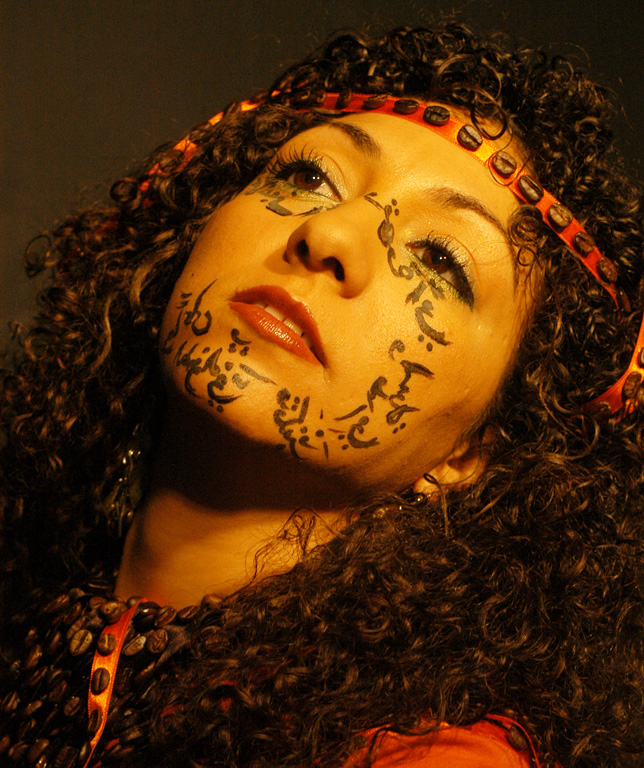 Even if strangers or followers of her work who don’t read Arabic struggle to understand the sentences scrawled across her face, Ashkar insists that “they still have the form to consider. As a creator, I aspire to balance between shape and content. The written word has a profound meaning, and I emphasize it on my own skin. My face is my canvas.”

How to Carry the Pain

For Ashkar, who was raised in the northern city of Acre and splits her time between her hometown and her studio in Tel Aviv-Jaffa, the written word is a source of inspiration and often the starting point from which most of her creative endeavors emerge. She combines texts in her paintings, and the act of speaking or reading out excerpts of religious or cultural works of literature are recurring elements in her performance pieces.

An especially resonant example of Ashkar’s use of language in her practice can be found in her performance from 2004, named Barbur 24000 after the address of her parents’ home in Acre. In it, the artist had bathed herself in milk in a somewhat compulsive and violent cleansing process that unfolded before the eyes of the viewers. While rubbing her face with the white liquid, she recited the rules of Muslim purity rituals in Arabic, which were simultaneously translated into Hebrew for the audience by an Israeli journalist. 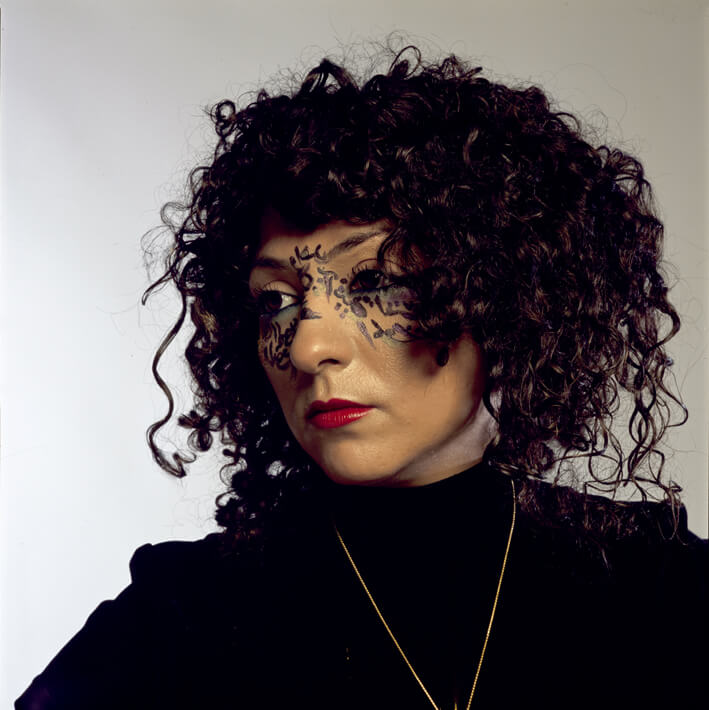 This performance and its contents are illustrative of the sociopolitical conundrums that Ashkar tries to give voice to in her robust body of work, which has been on display in prominent Israeli artistic institutions as well as galleries and museums abroad. While the acts of cleaning and grooming are typically affiliated with women, the regulations she read from the religious text and the strong body movements Ashkar made are considered to belong in the physically-dominant realm of men. Thus, she gave visual representation to the tension between the liberties of men and the restrictions imposed on women in society.

Unafraid of highlighting the fact that she is an Arabic-speaking, Muslim Palestinian woman in a politically charged Israeli artistic scene, Ashkar’s decision to invite a journalist to translate her words into Hebrew during the live performance reflected a keen awareness of the tense climate in which she operates. But when asked whether she finds it challenging to create in a predominantly Jewish and Hebrew-speaking society, Ashkar responds that she always tells herself “to remember that there is no one singular truth. Once you realize that, you don’t have to feel heartache.”

The circumstances in the Middle East remain complicated, and so is the artist’s stance on them. “Pain does exist,” she acknowledges. “I believe that the urge to create, in every creative person, stems from pain. The question is how you carry your pain and what you choose to do with it. So I always push myself to observe my pain and ask questions about it. I believe that good art makes one ask questions, and that’s what I try to achieve with my work.”

The Sun and Her Flowers

Ashkar doesn’t just ask questions through her practice; she also engages in conversation with other artists, namely celebrated European masters who redefined painting in the 19th century. One image that returns in numerous paintings of hers is that of sensuous sunflowers, which she paints over and over in a nod to two iconic series of paintings by Vincent Van Gogh. “Almost all of my artworks reference art history in one way or another,” Ashkar acknowledges. “I do love Van Gogh, and have an ongoing relationship with his paintings of sunflowers, which I correspond with in many of my works.” 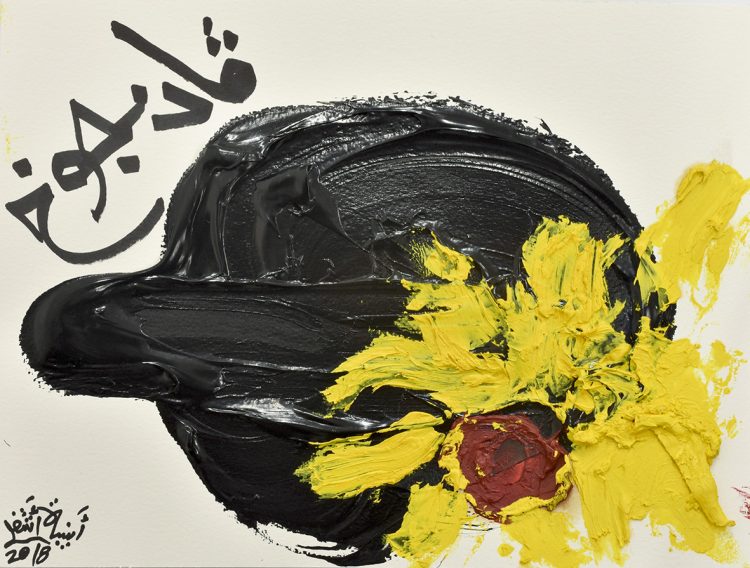 In 2005 she created A Tribute to Van Gogh, a monumental self-portrait in which she transformed her own face into a glimmering sunflower. In the photograph Ashkar’s face can be seen splattered in gold with a large sunflower decorating her mane of curly, black hair. She inscribed the sentence “I color your return with my eyelashes, the golden beams of the sun” in Arabic calligraphy across her left cheek, personifying the sunflower and turning it into an instrument that expresses a message of longing, and perhaps the seduction of an unseen lover.

Ashkar’s fascination with sunflowers continued in various series of paintings that she has worked on since. One of them, called “Following the Footsteps of Van Gogh, Miro and the Month of August,” was showcased in 2016 at the Tel Aviv Museum’s Helena Rubinstein Pavilion for Contemporary Art as part of an exhibition of works by artists who studied at her alma mater, the Hamidrasha School of Art. In 2019, Ashkar took over a 40-meter-long wall on the street outside Tel Aviv’s City Hall, which she covered with an enormous painting installation that featured black and yellow sunflowers. The installation is part of a group of such piece that she began working on during an artist residency at La Cité Internationale des Arts in Paris last year. In the opening event celebrating the inauguration of the installation, which Ashkar had named after the 14 levels of love as conveyed in the Arabic language (i.e., “Al-Hawa”), she invited passersby to revel in the sunflower obsession. 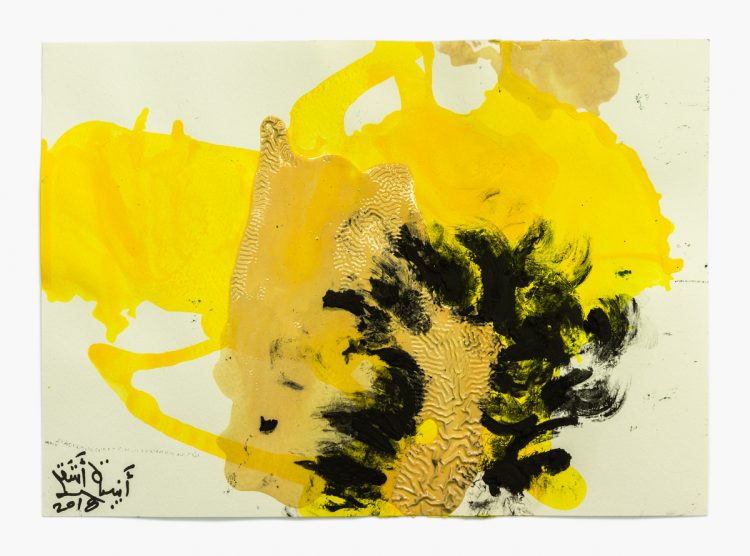 Handing out sunflowers to people from a bucket in return for stories about love, Ashkar turned the event into a performance of its own. “In my performances the audience often participates,” she stresses. “Even if they are just observers, by seeing my work they share it with me. It’s something I welcome, because it’s very important for me that my art be communicative. These moments of encounter with my viewers are very moving, because each time I see how people are healed and moved by art. It gives me strength to continue, even through hard times.”

Ashkar recalls that her attraction to sunflowers dates back as early as her childhood. “I loved being outside in the heat, and I remember the sensation of closing my eyes and being hit by the sunlight streaming directly onto my face. That yellow-orange color filled me with intense pleasure.”

In a reflection symbolic of her exploration of the connection between visuals and semantics, she tells me that “in Arabic, the word for sunflower translates into ‘the flower that worships the sun.’ The idea of needing the sun and accepting it is one that I deeply connect to. Also, I simply love the color yellow. It is evocative of light, happiness and warm energy, which are all things that characterize my personality, even when I make art that can be bleak or dark.”

While her sculpture-installations and performance pieces are very well orchestrated and based on the development of intellectual ideas, Ashkar’s paintings seem like free creative trials in which she revels in playing with textures and colors.

Flowers are one of her main subjects. She uses oil and acrylic on cotton papers and small canvases to depict thick and voluptuous petals that appear like modern interpretations of Georgia O’Keeffe’s wounded, open blossoms in works like the recent series Sunday Flowers. 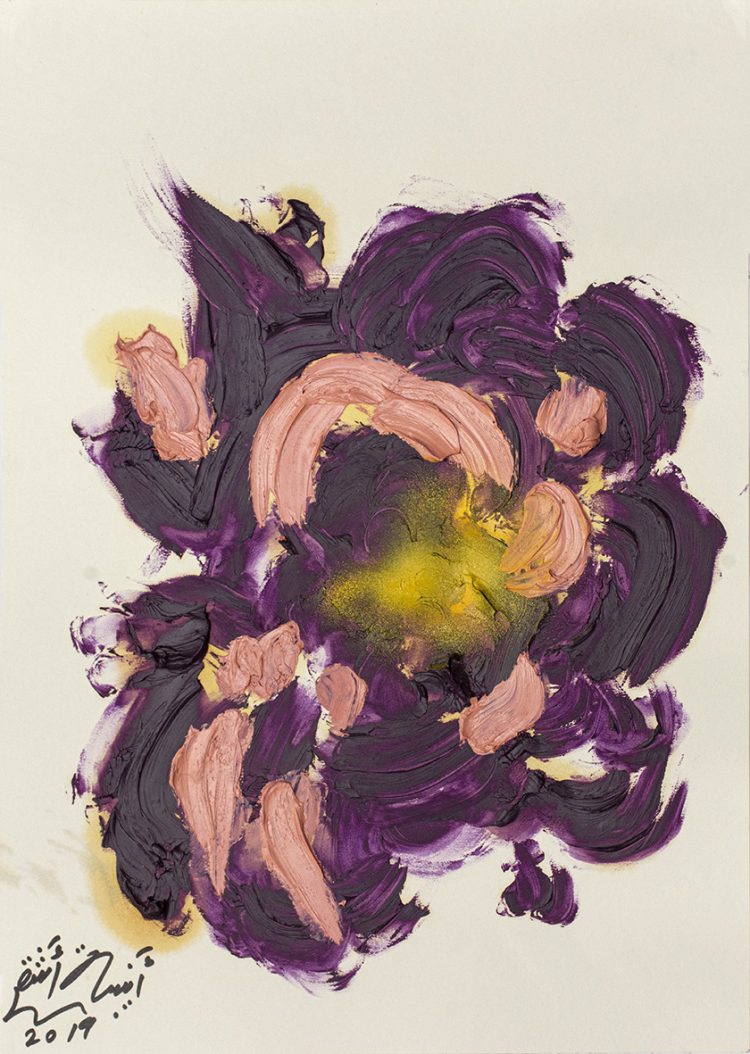 “I made this series during the residency in Paris,” Ashkar recollects. “While I was there, every Sunday I would go and buy a bouquet of flowers. I always searched for the most beautiful flowers, but also ones that had meaning, because I’m very well-versed in the qualities that are ascribed to flowers. Then I would put my fresh bouquet in a vase at the studio and start painting.”

Whether she produces performance pieces that expound on the connection between sexuality, movement and social critique or installations and paintings, Ashkar views her art as a vehicle of self-discovery.

“When I learned calligraphy as a young girl, I understood that I had actually embarked, through art, on a long journey of searching. It’s a personal search, I’m looking for myself,” she shares.

Even the techniques and materials she uses, such as well-preserved plates that feature in her readymade boxes, can be traced back to musings on aesthetics that are rooted in her early life: “I don’t remember ever having toys as a kid. I had charcoal, and I drew with it, trying to paint and erase. Even as a child, I liked the idea of erasing something but not entirely. I enjoyed leaving layers of my past attempts peeking through the surface of the painting.”

The themes and forms that she discovers in her studio continue evolving, and yet remain a  dialogue with her biography. “Looking back on those memories, I understand that everything was already there years ago. As an adult, I just keep developing that visual language.”