On a late morning of a warm Friday in the city, I find myself at yet another gentrifying neighborhood in southern Tel Aviv, heading to Meet Tsibi Geva in his studio. Between garages and workshops, on the third floor of a huge concrete building, Geva masters the beautiful, spacious studio, serving as an office, storage, and exhibition space as well. Stepping inside, passing through a hallway that accommodates some of his most iconic works alongside pieces he collected from his artist peers, and items he found in the streets, I can feel the decades-long experience and a certain matureness that echoes from the walls.

We sit down in a small salon surrounded by huge paintings from his earlier series, as I try to draw him back to the beginning, to where it all started. “Formally,” he says, ״my career started in the late 1970’s, when I completed my art studies at HaMidrasha. Since then my practice has been constantly changing, as I work with different mediums simultaneously; I paint, sculpt and create site-specific installations, so each piece is unique and completely different from the previous ones.” Indeed, despite several recurring motifs he has been using since his early career like birds, bars, windows, and written words, each of Geva’s pieces is an independent storyteller.
Quickly enough we get to talking about the 2015 Venice Biennale for which Geva was selected as the sole representative of the Israeli Pavilion. It was a pivotal point in his career, inciting a vast interest in his work overseas, leading him to divide his time between Tel Aviv and New York.
“Venice was a holistic site-specific installation,” he says, and a spark lights up his eyes. “I aspired to create something meaningful while maximizing the pavilion’s space, with all its limitations, of which there were many. The result was an installation on the pavilion’s exterior walls that was visible from the outside; and an exhibition of site-specific pieces inside, with the two corresponding and reflecting one another. “I tend to see it as one immense work that synthesizes the various means of artmaking, allowing for dialogue in both a formal and a contextual manner.” 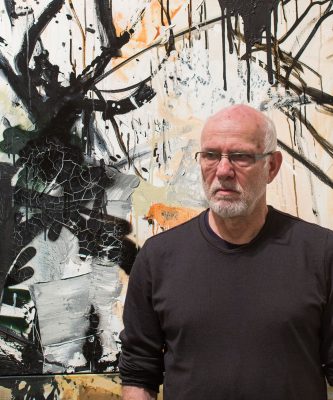 I remember that visiting the 2015 Venice Biennale was when I first became captivated by Geva’s work; the structure, a nice Bauhaus edifice, was transformed into a rough bunker in between construction and destruction, coated with thousands of used rubber tires. Geva and his staff planned and mounted all pieces in Israel then transported them to Venice in what he describes as “a precisely scheduled and well-executed military operation”.
Geva is experienced in creating site-specific collage installations composed of repetitive items that need to fit a specific space with very specific measures. “It’s like a complex puzzle that I construct of uneven pieces. When I used 64 shutters in a collage, for example, I had to collect at least 400 of them and start playing until they fitted harmoniously to create something meaningful.” – Where do you find so many objects to work with? I ask, astounded.
“I usually drive around and see something at the side of the road so I stop, drive back, and observe it. If it makes me feel something, and it fits in my car, I pick it up. Then I creatively work my way into finding more items of the same genre.”
There must be some common characteristics to all these objects, some criteria? “Generally, these are all objects that were thrown away because people had no further need for them. I collect them and give them new lives. They are not symbolic or exotic objects, but rather typical articles of the Israeli society, leftovers of the local culture if you’d like.” The Biennale’s president, when visiting the pavilion, defined it as “collective unconscious”, a definition that Geva is more than happy about.

“While each place has its own unique cultural leftovers, I came to realize my art had to communicate with an international crowd that is not necessarily familiar with the local references. The audience interprets my work using the tools they have, and not necessarily the way I meant at the time of conceiving the piece. So as an artist one must be aware of the fact that key elements and triggers will not be delivered to certain audiences, assess the elements that will pass through, and decide whether or not these are sufficient. I am very conscious of this idea during my creative process, thinking about connotations that are relevant on an international level, giving my strong connection to the urban identity here in Israel. So at the Biennale, I approached international current affairs of that time – immigration, mobility, and random shelters, allowing those who were not familiar with the local Israeli context, to connect with the works.”

I sense it might be a delicate matter, yet I can’t help asking him about the political connotations of his work. I doubt that today’s Minister of Culture and Sport would have chosen an artist like him to represent the country. Geva agrees and says “I see myself as a part of the Israeli society, not the Israeli government; I grew up here and I love living in Israel, this is my culture, my language; On the other hand, like many Israelis, I oppose the Israeli occupation, and the conflict within the Israeli society regarding the Israeli-Palestinian conflict is in the core of my artistic work. Working on the Biennale exhibition I stayed true to my ideas and values so eventually, it was an honor for me to be able to address this conflict on such a platform and I felt the Pavilion was well accepted.
But since my early career here in Israel in the 1980’s, my works have been too often interpreted as nothing but political. I never objected to being a political artist, yet I know my path evolved throughout the years and took on other directions which might be overlooked due to this political classification. Recently, my art has become more existential, its psychological levels grew more substantial over time, as I developed a new, multi-dimensional model of work.
One of the reasons why I like presenting my work to an international audience and why I often collaborate with non-Israelis is because they are not obliged to read my art through this political lense, as they don’t necessarily have the full context of the political situation here. It allows them to see other aspects of my art and opens new channels of communication and interpretation.”

Fascinated by his approach to art and art-making, I expand the discourse to Geva’s current practice and the creative process he follows. “My creative process is polyphonic”, he explains, “I work in parallel on several pieces and then interconnect them so that no work is superior to another. I produce my paintings on my own, in the studio, and whether it takes a few days or a couple of months for me to complete a painting, the progress is immediate once I am facing the canvas. My sculptures and installations, on the other hand, require careful planning and production, they are usually due at a certain deadline and I often use assistants while creating them.”

Geva has recently presented a duo exhibition with Itzhak Golombek at Barbur Gallery in Jerusalem. Future exhibitions include a site-specific installation with references to recurring elements from his paintings at the Herzliya Museum of Contemporary Art opening next September, and a mini-retrospective exhibition in New York opening in January of 2020.
In the meanwhile, he keeps dividing his time between Tel Aviv and New York, teaching at the School of Visual Arts for one semester a year, working in his studios in both cities.