I arrived at Nurit David’s studio on a Friday noon, the large window blinds were wide open and a bright light made her latest series of iconic works seem to float in space in perfect harmony. Walking in, I felt transported to a magical realm composed of geometric forms and warm colors sprawling at my feet. As I was acclimating myself to the wealth of sensation, Nurit was peacefully conducting this orchestra with her pleasant presence, charm and a lifetime of experiences interwoven into her canvases, catalogues and books.

We sat by the window, facing one of Tel Aviv’s most quintessential streets. David watched over it like a monarch overlooking her kingdom; the place where she grew, experimented, created and abstained from marriage during four decades of art making.

I was unsure where to begin the dissection of David’s long and diverse career in the Israeli art world so I asked her exactly about that – the changes in style, subject matter and genre throughout her works. ”The changes stem from a variety of reasons” David says, ”the most obvious one is geographic, as my works are all place-related; there is always an explicit reference to the location of my home and studio at the time of making an artwork, and a representation of the emotions correlated with this place. But if we want to be more philosophical about it, I would say I simply don’t believe in concepts like “style” or “personality”. I do not approach art as a tool for expressing inner richness but rather see art as a constructive tool for self enrichment, thus I allow myself to experiment and investigate different styles and genres, as I change with time too. Or maybe I just get bored fast” she giggles.

“But there is a certain thread”, David points out elements that can be found in each piece of art she’s created. “There is always a syntax and my works are somewhat literary; I compose them word by word, sentence by sentence, paragraph by paragraph. Every work I create is a collage, setting up a new space out of different times and places, never presenting one subject matter while showing off the rough stitches connecting it all together. It’s like an embroidery made by Victor Frankenstein”. “But much more aesthetically appealing” I had to add. 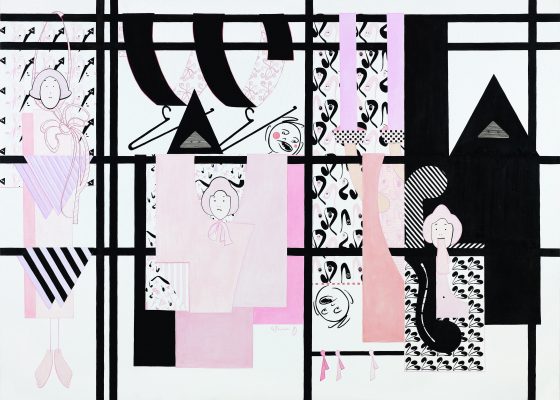 Even though David has been exhibiting since 1978, she considers her 1980 piece “I Was Born Chinese” as her first work. “I wrote the text without any familiarity with Chinese culture” she explains, “but this work resulted in my exploration of East-Asian cultures and “The Chinese Works” series I created during the following three years.” When I point out the multiple Asian references found in many of her works, she chronologically divides her career into three periods of inspiration.

“Until the early 1990’s I was inspired by China and had an existential approach to art, I believed it was possible to change reality and ourselves through art, and that I could affect my own destiny. Then a period represented by what I call a “European despair” began as I started making figurative oil on canvas paintings that were considered taboo in my close-knit artistic community of that time, acknowledging real-life limitations that exist when one actually tries to change reality. The European period lasted until 2004, when my Japanese life partner of ten years passed away. That’s when I started creating art inspired by Japanese culture and aesthetics, giving more emphasis to shapes and adding a somewhat humorist flavor to it. Early works from this period depict life after death, while later ones are more design driven.

If you look back at the first two periods, content was very important; I constantly dealt with the question of “what is the right and best way to live life?” But since 2004, something changed. I was no longer concerned with thoughts regarding the future and allowed myself to incorporate design, fashion, and architecture in my art.”
Such is the 2012 “Late Spring” series in which David poetically combined fashion and architecture, designing wedding dresses out of Tel Aviv’s iconic buildings.

So now what? I ask. “Now I work with templates I create on my computer – patterns – that I then copy to the canvas, adding more shapes, lines and colors to it, just as many as the painting can bare. I play with different methods of exhibiting my works in this space, as I do not take any of them outside anymore. It became too complicated and I feel there is no need to do so. Also, I discovered printmaking and I enjoy printing my own little editions.” She hands me a little booklet which she recently printed. “I’ll add it to my zines collections!” I proclaimed enthusiastically. “Zine..? Let me write that down so I can google it later”.

Anouk Lorie: Finding Your Way As A Multi-Passionate Entrepreneur

Going to Infinity and Beyond: In Conversation with Artist Lihi Turjeman