In late 2021 we were approached about an exciting new project. We were intrigued and dove in, and are happy to report that it evolved into our biggest commercial art advisory project yet!

We had the honor of creating an art collection for the brand new R48 Hotel & Garden, a luxurious boutique hotel in the center of Tel Aviv’s iconic Rothschild Boulevard.

We loved the process of working on this project and thought we’d share a little insight on what goes into a large-scale commercial art advisory project – from research and conception realization, and a bit about our thought process when it came to selections of specific artworks.

One of our goals was to make the hotel a celebration of contemporary Israeli art, and to add additional layers of meaning to the seamless connections that the architects Avital Gourary and Natanel Elfassy, founders of AN+ Studio, were able to create – between history and the present, and between indoor and outdoor spaces.

We started the months-long process of putting together a cohesive collection that speaks a universal language, while revealing truths about different aspects of Israeli life, culture, and identity. All the while we got to experience the progress of the space itself, and were truly inspired by witnessing this birth of an oasis of calm in the center of our bustling city.

We worked closely with the hotel, which was committed to supporting local artists and to featuring the finest works of contemporary art – ones that are in line with the brand’s meticulous aesthetic, and which will stand the test of time for years to come, all within the framework of the project’s budget and schedule. 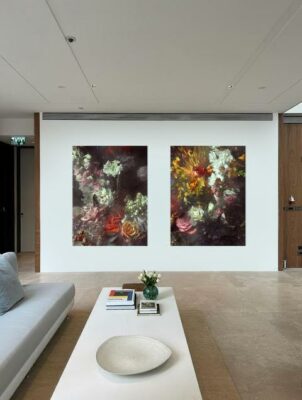 Ori Gersht at the Entrance of R48 Hotel & Garden

Another artist with a deep connection to representation of truths about nature and human nature through her photography, is Tal Shochat. Shochat’s works featured both in the hotel’s public spaces and the suites, deal with questions of one’s connection to a physical place, the intersecting roots of Israel’s diverse communities and what makes a homeland a home. Shochat’s work touches on her personal biography and place in Israeli society as a woman and as an artist. A different voice reflecting on these themes is that of Anisa Ashkar. 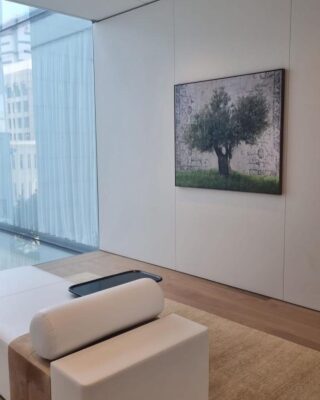 Ashkar’s piece that is featured in the collection is part of her iconic performance practice. For over two decades, Ashkar has been using her own face as a canvas, writing a daily sentence on her face in Arab calligraphy, visible to all, but not understood by all. This artistic practice encourages viewers to engage in conversation with her and learn about diversity, her biography and Arab – Palestinian identity. Ashkar explores various political issues using the symbolic meanings of texts, as a way to explore and react to art history, biographical memories, socio-political agendas and more. 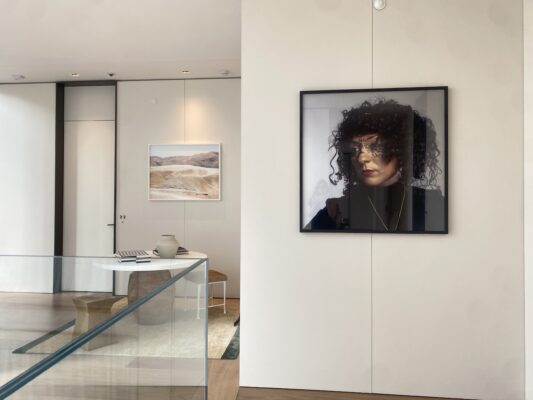 One of the connections we emphasized in the collection between the artworks and their locations were the architectural links. A highlight of the thoughtfully preserved building is the exposed brick in the main elevator shaft. The large elevator is clear, making it a beautiful experience of physically moving between the old and new elements of the building. On two of the floors we placed photographs by Daniel Tchechik across from the elevator. His serene yet seering color palette in the images of local desert scenery are in perfect dialogue with the layers of brick and the rawness exposed behind the clear glass.

The deeper we dove into the concept of the hotel & garden, the more it became clear that one of the artists we had to place in the collection was Boaz Noy. The paintings of this Haifa based artist are a love letter to the city, its architecture and its urban greenery. For Noy, the city is a theatrical spectacle. At times the cityscape is the backdrop, but often it is the play itself. The Israeli urban sphere is a rapidly changing one, tactile, loaded with contrasts. One of his paintings displayed in a suite, is directly inspired by the hotel’s location – Rothschild Blvd. and the green lung that urban planners sought to create with its signature Ficus and Poinciana trees.

Looking back to previous generations of Israeli art, it was important to us to include the monuments artist Lea Nikel in the collection. Nikel is widely considered one of the most important, influential Israeli artists and one of the mothers of Israeli art. She was an accomplished print maker, and created a large body of works in both silkscreen and etching techniques. Her works featured in the hotel are part of a limited edition of silkscreens from 1990, which were exhibited at Tel Aviv Museum of Art.

Some of the other artists featured in the collection include: Miriam Cabessa, Liat Elbling, Tsibi Geva, Mosh Kashi and Natalia Zourabova. 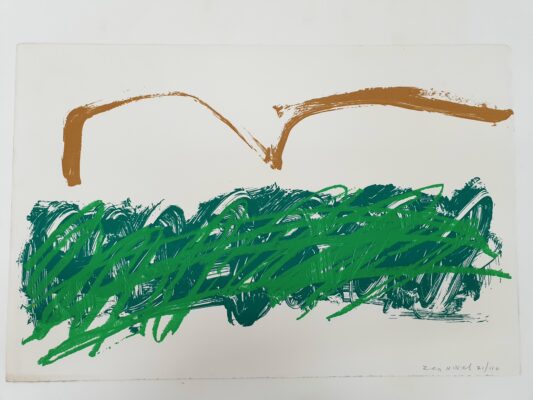