To understand Israeli painter Boaz Noy, whose large and ambitious cityscapes drip with intense colors, one must retrace his frenzied steps back and forth between Israel’s main metropolises – Tel Aviv, Jerusalem and Haifa.

When the artist opens the door to his studio, a cavernous and calm space located at the heart of the downtown area of his hometown, he welcomingly gestures around him. “This is home, sort of,” he tells me, then looks out the window, sighs and adds with a laugh: “But I’m in disagreement with this city right now.”

The northern Israeli city, a sleepy but beautiful spot where Arab and Jewish citizens live side by side, often stars in his passionate oeuvres. In his signature bold and large brushstrokes, Noy charges at the canvas with brown and purple, capturing a hilly Haifa street at dusk; carefully manipulating blues and grays, he depicts the boulevards of his childhood at dawn in trademark works such as ‘Third Floor View to the Sea.’

As we glance together at the walls around us I tell him that if he feels disenchanted by the place where he grew up, abandoned and returned to a decade ago, it’s not evident in his works. If anything, they look like a love song for Haifa. “No,” he corrects me. “My art is a love song for urbanity. It’s a love song for any city.” 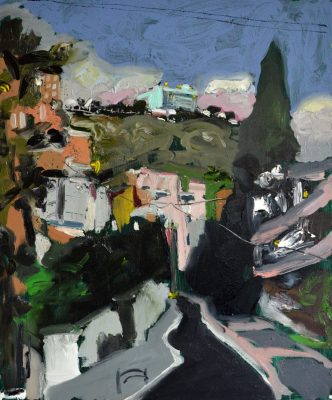 ‘An escape route from myself’

The 46-year-old Noy, an autodidact painter, studied architecture in Jerusalem’s Bezalel Academy of Art and Design. He spent significant periods of his life in the Israeli capital and also lived and worked in Tel Aviv. The three cities feature dominantly in his works, seeming at times like recurring characters in a book that an all-knowing narrator describes with a mixture of disdain and longing.

Noy agrees with this metaphor. “I have a private code that I can detect in my own paintings, where I see the vibe of the different cities reflected in them – be it Haifa, Tel Aviv, Jerusalem or Paris,” he says.

The three urban muses have distinct ways of affecting his creative process. “In Tel Aviv there is something liberal and open that I see in the paintings that I make there, much like the city itself that feels very weightless,” whereas in Jerusalem the painter says that he feels “weighed down by the traditional stones. I always try to lighten up there, but the experience is more European and heavy.”

For now both his family life and studio are rooted in Haifa, but Noy admits that he keeps asking himself: “When will the expiry date of my stay here come?”

While the nomadic urge can be debilitating, the artist believes that it helps fuel his craft. “Maybe this question of where I will live also allows for movement in my creation. It leaves me an escape route from myself.” 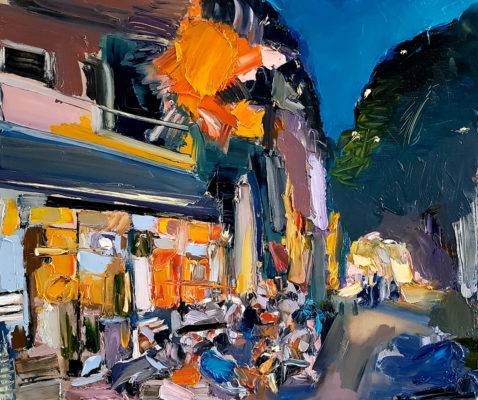 Lurking in wait for the paintings to come

The dilemma of his geographical trajectory isn’t the only personal aspect that seeps into Noy’s art. The painter, who flirts with post-impressionism in his attempt to capture the urban reality sprawled outside his studio, says that for him art is not necessarily bigger than life. Rather, the private and the creative constantly intertwine.

“I’m always lurking in wait for the paintings to come to me,” he explains. “When a painting does come I know that I have some experience that I have to recreate, and then the painting is kind of me just regurgitating that experience.”

As an example he cites one of his more intimate works, a painting of Noy’s son reclining in the bathtub. “When I painted my son in the bathtub, it was me returning to that moment of my son taking up space in the bathtub, all spread out in there. He seemed so spiritual in that second and it made me think about how terrifying it is, the responsibility of being a parent. So I had to recapture that.”

Such confessions regarding the mental impetus behind his works may give pause to the unknowing observer encountering them for the first time. Although suffused with strong pigments, Noy’s masterfully-executed portrayals of urban life seem to have been sketched with some emotional distance. Perhaps this, too, is a technique he applies to enhance the sentiment of utter solitude dwellers of large cities feel at times?

When I share this notion with him the artist says that he is not surprised: The duality that I felt has been echoed by other critics and observers of his work before. How does it explain then? “It may look on the outside like I focus on the image, but the whole story of my paintings is the rebuilding of some moment. It’s not related to how things appear. Every painting is almost like a journal. Every moment I paint is a moment I remember forever.” 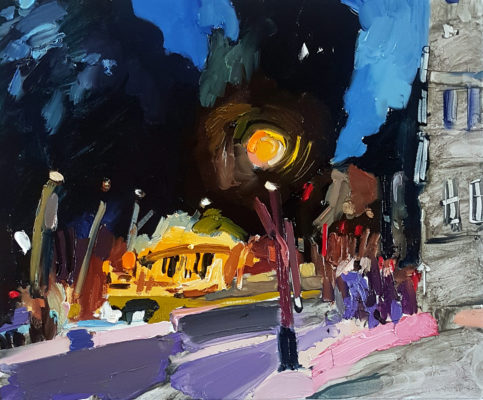 Before I leave, we get up to observe some works lined up against the wall. One of them in particular, titled ‘Red Night (Beautiful Strangers),’ captures my glance. The realistic red and blue hues of a street corner at night pop out at me, bringing to mind clandestine but sad scenes of urban America immortalized by U.S. painter Edward Hopper. “There you go,” he exclaims. “You understood. I believe that if people have patience they can take a closer look and then understand my experience, this moment. I feel that I put my heart on my sleeve in every single painting.”